We are in the home stretch (we hope) in getting our house ready for market. It has been a long, tedious process, one that feels like it will never end.

Fortunately, I have plenty of distractions to help maintain my sanity and joy.

This week I moved my loom upstairs to my “project room.” I cleared out a lot of stuff that was cluttering up the room: journals, scrapbooks, bins of organized family pictures and old letters, and more bins of neatly folded fabric. My u-shaped room now has a weaving area, a sewing area and a desk for my genealogy. 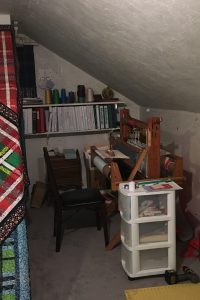 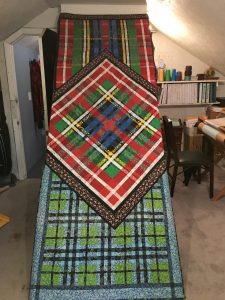 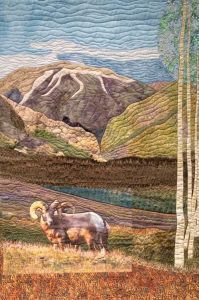 Weaving. I bought a warping board on my birthday (early October) and started the process of dressing my loom to make sampler tea towels. I was aiming for a 9-yard warp of 300 strands of 8/2 cotton. I thought I’d complete my project before Thanksgiving but it took all those weeks just to get the loom dressed (i.e. ready to weave.) 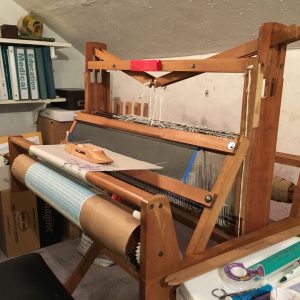 Once completed, however, it has been such a pleasure to weave! In the midst of life, it’s so sweet to sit down for 20 minutes here and there and weave for awhile. I love the rhythm of it as well as the challenge of catching mistakes and fixing problems. Love learning new skills.

Genealogy. I bought myself a DNA kit in December and sent it off for analysis. The results were no surprise: I am 49% Scandinavian, 30% split between the UK and Ireland, and another 11% Western European. I suppose the biggest surprise was that Western European piece. My maternal grandparents were both very Swedish; my paternal grandparents both very Scottish, though a few generations back one of the families lived in Ireland. I don’t know any ancestors that lived in Western Europe, but I suppose my genes could have traces from people that migrated north before records were preserved.

Through the process, I met an Irish 6th cousin who lives 15 miles down the road from the little town of Donaghadee, County Down, where our mutual great-great-great-grandfather was born in 1787. I spent a week or so studying his descendant tree to learn all I could about the family. About half of them emigrated to Australia and another third of them ended up in either Canada or America. Very few of them remained in the Scotland or Ireland.

Through this cousin I also found transcripts of 48 letters written by my grandmother’s bachelor uncle to a niece back in Scotland from 1905 to 1942. Uncle Andrew emigrated to America in 1905, spending a year on the east coast in shipbuilding. His name and address in Quincy, MA are listed on my grandmother’s passenger records as her sponsoring relative. However, both she and her uncle came to Chicago where they joined another uncle and his family.

Writing home, Andrew reports that “we have Jenny Bitcon here with her companion Mary Turner. We have christened Jenny “Clipper.” She has a tongue that would clip clouts.” He also mentions that “Jenny and Mary got situations both in the same house.” In 1911, he reports that “Jenny will be married soon,” commenting, “that will be all married now. My, what a great relief for the mother.”

These kind of distractions make me happy 🙂

P.S. I googled “a tongue that would clip clouts” and found this in a Dictionary of the Scots Language: a tongue that wad (cud) clip cloots (clouts), a sharp tongue; Gen.Sc.; (4) clip-clouts, a sharp-tongued person; (5) to clip cloots wi’, to quarrel with, find fault with (someone).