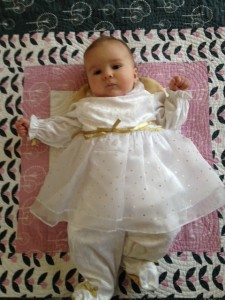 This year on my birthday, I spent several hours holding Sweet Olive, a fulfillment of last year’s gift and 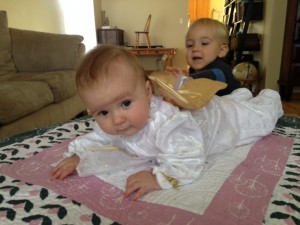 And now that Annie has posted her Facebook Announcement, I am able to share another “birthday” story:

Our family vacation this summer was an emotional roller-coaster. We were thrilled to have Anne and James home for a month and planned cottage time together as a family. It started with our Re-Wedding, a fun day of sharing their love and commitment for one another with the whole family. Two days later, Johnny flipped our car on a country road not far from the cottage. He was able to crawl out the driver’s window and wasn’t injured beyond an achy body and depression. He was taken the the ER, but released that night with a couple tickets in his hand. A bit of family drama followed. (I will spare you the details.)

We went on to another cottage with just half of our family (+ 3 friends) for a fairly restful week in Canada. We were traveling home in two cars, planning to stop for a few hours at our small group “Day at the Dunes” and then drop James and Anne off at Midway Airport for a quick trip to visit good friends in Alabama. We had overnighted in Grand Rapids and had started our trip homeward.

I wanted to stop by and check out a mental health facility that I’d found on the Internet. (I joked that they could just drop me off there.) As we were following the GPS to it, Anne called from the other car asking about appendicitis symptoms. We missed our first turn and pulled into the next parking lot, which happened to be an Urgent Care facility. I talked more with Anne and decided that appendicitis was strong possibility. I told her we needed to check this out before putting her on an airplane.

(Interesting side note: Because of Obamacare, we still have Anne on our insurance even though she is married and living on the other side of the world. It’s crazy, but also turned out to be a real blessing in this case.)

So, we went to the Urgent Care. Anne and James came out a relatively short time later saying she needed to go for an ultrasound. I asked what they had said and her first response was “I can’t really say.” I asked if she was pregnant and a minute later, she admitted that she was! At that point, there was the possibility that it was an ectopic pregnancy, hence the need for an ultrasound.

She actually had been sent to the ER, where they did more tests. Her appendix was fine and a cyst was noted on her right ovary, which is what was causing the pain. Her hormones were rising appropriately and the fallopian tubes looked normal. She was told that it would be okay to fly to Alabama and that she should follow up with an OB doctor in Chicago the following week.

My heart started dancing. Even though we knew we weren’t out of the woods with an ectopic pregnancy and that the cyst could rupture, we all started feeling excited about the surprise pregnancy. For me, it was such a treat to be physically present as all this unfolded, as it so easily could have been just a phone call or Skype message.

The following week, Anne had another ultrasound and blood test that indicated that it was a normal pregnancy, progressing as expected. The cyst was large and still could cause problems, but also might resolve on its own, which it has.

We had a few fun days of anticipating a baby together and shopping for maternity clothes before putting them on a plane back to New Zealand. The goodbyes were a bit harder than usual, but I knew I’d be seeing them 10 weeks later. I was already imagining how hard it will be to say goodbye to grandchildren in the future.

So those are my two birthday stories, sweet hours of holding Olive and remembering last year’s birthday gift. Ultrasound pictures of our next grandchild and hearts full of gratefulness for the blessings of old age.

And now I’m on my way to New Zealand with a suitcase full of baby things, looking forward to seeing Anne, who will be just stating to look pregnant at 16 weeks/4 months.