Late last night we said a reluctant goodbye to Petersburg, watching from the deck of the Malaspina as the lights of town slipped out of sight. It was a good week.

Three full-on rain days gradually turned into partly sunny days at the end. We donned our rain jackets and (in my case) garden shoes and carried on. I shopped, walked and visited the new library. We took trips out the road in both directions, nearly circumventing the island.

But mostly, Petersburg was about our people: We had two delightful evenings with good friends from the Bible church, reminiscing and catching up on our families. Both served us halibut–a special treat! We spent a lot of time with our friend “Clyde”, eating out and doing errands around town. (His real name is Harvey but he decided to use his middle name in light of the hurricane ravaging the South.) Anne and I had a wonderful lunch and caught up, chatting at the Pilot office, the newspaper she and her husband own. On Sunday we enjoyed fellowshipping at the Bible church and sharing in a Back-to-School BBQ.

We were sad to see the empty KRSA studio building, the still blinking towers (without a signal) and our house, the back porch littered with beer bottles. Sometime after our last visit (2010) the mission decided to pull out of radio ministry in Southeast Alaska. For awhile other groups attempted to run the station and then finally, just a few years ago, KRSA was completely shut down. Changes in radio and the accessibility of the Internet precipitated some of the changes, but a change in focus (to church planting) for the mission also contributed. We knew about these changes, of course, but seeing the empty building made it a lot more real. 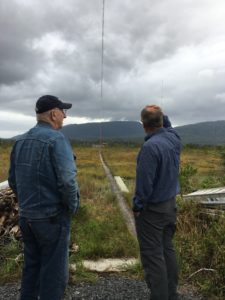 Once again, it was the people–and their stories–that encouraged us. It was really fun to meet almost all of Brian & Carol’s family (including 7 grandchildren), to hear so many stories about other adults that were small children so many years ago. This generation of believers has built a beautiful new church building and carried on ministry to the community, growing strong in Christ. I don’t think we realized how new many of our friends had been to the faith back then, nor how recently the church had been established. 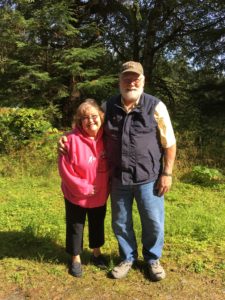 We dug our roots down deeply there–even though we were only in Petersburg for 18 months–so we were delighted to see how God has been working in their lives in the intervening years.

In the 35 years since we left Petersburg with our 8-month old firstborn, we’ve traveled back several times. We went back with our small children three years later (1985) and again when John2 graduated from high school (2000.) Chris visited with Ellen Ferris once, and John (once with John2) came back twice to help with engineering in the later years. In 2010, we sent Annie to Petersburg to “practice” being far from home before going to New Zealand for Bible school. After she left–and found that she loved Petersburg–Chris decided to go up and visit for the last week. This trip was our 6th and probably not our last.

We love our Petersburg Peeps.