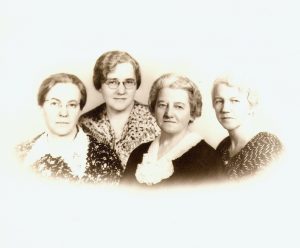 I love this picture of four sisters: Jennie, Maggie, Martha and Lizzie. They were born to James and Agnes (Gray) Bitcon during a ten-year span of years from 1881 to 1891 in Dumbarton, Scotland. By 1897, they were fatherless, with limited resources and no social security. They worked together to make ends meet. All but one would eventually emigrate to America to seek a better life.

I’m fascinated by the way these sisters’ lives intersected in spite of time and distance, helping one another in times of crisis.

This picture, taken in 1937, fascinates me. I’ve long wanted to write a story about these four sisters, so this month—November, National Novel Writer’s Month—I focused on them during my annual project to write 50,000 words. I spent a great deal of my time and writing doing genealogical research, trying to find out anything I could about the real women portrayed here.

Jennie, of course, is my grandmother. Maggie was the first-born; Martha was second-born; and Lizzie was the baby of the family.

Last week I started asking relatives about their memories of one of the sisters. I learned that the story is more complicated, messier, than I imagined. That shouldn’t have surprised me. I had vague memories and impressions that at least two of the sisters did not get along. Jennie had a sharp tongue and could “kill you with kindness and cut you to the bone if so inclined.” Lizzie was “difficult.”

This could actually make my story much more interesting, adding tension to the plot. The challenge is to do that without disparaging any one sister and/or offending living relatives. If I ever write my story it will be a fictionalized, imagined story, loosely based on these four women. It will be honest about their lives and personalities, but full of grace without (I hope) being sappy.

Last week I found two more pictures of the sisters. The one on the left was taken in Scotland, circa 1911. The second has Jennie “photoshopped” into the picture. Both pictures, likely manipulated with whatever limited technology was available back then, are good metaphors for the lifetime of relationship shared by these women, across miles, oceans and separation. 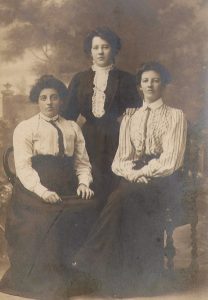 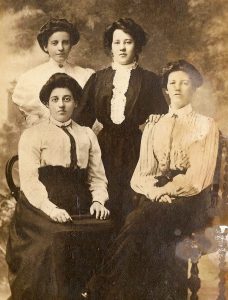 I never had a sister. In the past, that hasn’t bothered me, but at this stage in life, I’m starting to wish I’d had a sister or two—or three!

I do have daughters though, and in three short weeks, these sisters will be together for a short time, also crossing miles and oceans and separation, to be together. So grateful that we get to do these long-distant relationships in a time when travel and technology make connection much easier, much more frequent.