Every November I put myself through the paces of writing 50,000 words for National Novel Writers’ Month (on the website, 750 Words.) 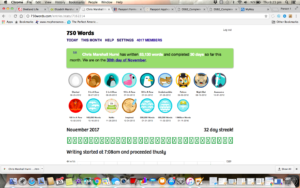 I write a minimum of 750 words a day to qualify and anywhere from 1500-2500 words to keep up the necessary pace. I usually pick a line of my genealogy research to explore so my writing is a combination of fact and fiction.

This year I focused on my grandmother, Janet Bitcon, and her two husbands, Robert Marshall and Laurence Christie. I’ve written about them before, putting together a series of vignettes.

Since I last wrote about them, I’ve learned a few things:

2) A story circulated around the church was that the man sitting in the car stopped at the railroad crossing was a friend. He and Robert had been racing to see who could get to the lake first. The story was that Robert saw this as his chance to slip through and get ahead while his more cautious friend waited for the train to pass.

3) We always wondered how Robert Marshall (husband number 1) and Laurence Chrstie (husband number 2) met. Looking at their respective Ship Passenger Lists from 1908 and 1907, I noticed that both men listed John Halcrow as their contact in Chicago. That seemed like an impossible coincidence until I noticed that Robert’s sister-in-law listed her birthplace as Shetland. It’s very likely that they met through this mutual friend.

4) I found the building permit for a home my Gramma lived in from 1933 until at least 1951. I’m hoping that it might lead me to information about the side business of building spec houses that my grandfather helped organize. It’s possible that his business built the house. (He died a year before the real estate bust of 1926, which decimated  the “fortune” Robert had left her and ruined Laurence Christie’s real estate business.)

5) I also visited Cook County Archives and ordered the files from Probate Court for both men, which I should be able to view next week. Laurence actually made a handwritten will  giving all he had to my grandmother–five years before she agreed to marry him. The will is stamped “Denied” and therefore would have gone to Probate. I’m assuming that Robert Marshall, aged 34, did not even have a will. “All the more reason for probate,” is what the archivist told me.

A friend recently advised me to write and write and write. He also told me my story needed a beginning and an end, so I spent time working out a good ending (I already had a beginning) and an outline. These last few days, I wrote and wrote and wrote. My tendency is to focus on research and procrastinate on the actual writing. I decided that I would be happy with writing a story for my family. He told me even they still shouldn’t have to read something boring!

So, 53,130 words later, I am claiming my NaNo “prize.” I hope to keep writing, but the pace will definitely slow down. Christmas is coming and then, in January, a five-week trip to New Zealand. I think I have a few things to do.