I’m 41,000 words into the month of November, back to work three days a week, and frustrated that there aren’t enough hours in a day. Sleep feels like a necessary evil and an evasive pursuit.

My first question is: “Why do I do this to myself?” and then I wonder how I can pack more into my day?

My current project has been to process genealogy details for my Swedish family (and writing about it for my 50,000 word project.) A few days after I last wrote I decided to sign up for Ancestry.com worldwide. I started entering our family tree and followed the “hints” as they popped up. One thing led another and pretty soon I opened emails containing pages of details about some of our Swedish ancestors. (The source person ended up being a 6th cousin one way and a fourth cousin, once removed another way.) I printed 64 pages of “notes” from just one of the emails.

Along the way, I decided to transfer some of the details onto color coded 3×5 cards that could be organized and manipulated to make sense of the relationships etc. Ah, tedious choice. But, unfortunately, one that I also find fun and addictive. I can’t wait to get home from work to do more and I’ve stayed up late too many nights to squeeze in a few more details. (Late night computer use isn’t conducive to sleep ;-(

And then, there are all those other projects that are on hold while I indulge in this one: I want to get James & Anne’s gifts in the mail by the end of November. I have a bit of Christmas sewing to complete. My journal and house-organizing projects are on the back burner. The Daniel Plan is hanging around in the background. Fabric for various quilt projects stares at me whenever I venture into the sewing room (which is not often.) 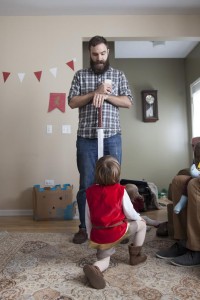 I did manage to make a tunic for Kellen’s party. He was knighted “Sir Kellen” in honor of his 4th birthday with the not-so-secret agenda of encouraging him to move into the 4-year old stage with a new level of obedience and cooperation with his Liege Lord(s). Laura planned a party that was both relaxed and full of fun details and decorations. There was a dragon pinata to slay, miniature catapults throwing mini marshmallows into the cups for hot chocolate and plenty of swords and shields. I love the details–at parties, in a story, and in life.

Adding a couple generations to the top of my family tree doesn’t do the trick. Deciphering the details of names, dates, and locations tells me stories that help history to come alive.

For example, Peter Svensson and Caterina Persdotter lost four children to smallpox within the span of one week, three of whom died on the same day, February 15, 1800 and one on February 23 (ages 8, 5, 3 and 1.) How do you live through grief like that? That would have wiped out my whole family. Fortunately they had other children who survived, or I might not have been born.

I love Swedish surnames, the [insert father’s first name]-sdotters and -sons. It is both confusing and perfectly logical. Husbands and wives did not share the same surname as she would be somebodys-dotter and he would be somebody elses-son. Siblings had similar but not identical names, Johansson or Johansdotter.  As the generations grew, they added more middle names and eventually the whole family would use the -sson appellation. Often when they came to America, they chose a whole new family name crafted from some part of their heritage. The man who lost his family estate Veka, (or Weka) became Wekander. My grandfather’s family, from Berga parish became the Freebergs. (My great-grandfather Carl said there were too many Ericssons in the phone book–only I’m not sure they had phone books in 1890. City directories, maybe.)

I am enjoying all this but I can’t sustain it, especially through the month of December. And I know myself well enough that once I set it aside, it might languish for several months while I focus on something else.

So many projects…so little time.