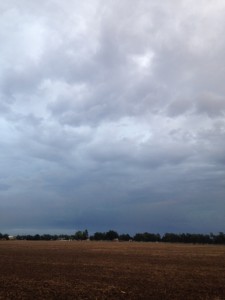 For some reason I am getting a kick out of being in Kansas. I came to attend a conference on Swedish Genealogy, but have also been able to visit with two “gold friends” while here. Last night I got to watch the lunar eclipse/red moon from a balcony overlooking the little ArKANSAS river. (That’s how they say it.)

I flew to Witchita in a long narrow plane and was picked up at the airport by one of my nursing school friends, Jeannie (Kirstein) Hett. We chatted as she drove me out to the little Swedish town of Lindsborg. We had dinner at the Swedish Crown and then she left me at the opening event of the conference. The next morning I spent a few hours in the computer lab asking questions that I’d come across in my research. (“Does that phrase really mean divorce? This one seems to be saying that he was punished for stealing. Am I right? What does this phrase mean? Oh, ‘escaped from service’ next to ‘leaving for America.’ Cool.”) 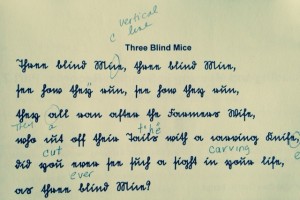 That afternoon and the next day were spent in lectures about burial practices and graveyards (I had a hard time staying awake through that one,) finding living relatives, military records (I do have a couple of soldier ancestors and had already found my way around some of these records,) and two sessions on understanding Swedish written in Gothic handwriting. It’s fairly easy to use the Swedish records for the basic facts of an ancestor’s life, but interspersed in the records are all kinds of remarks, written in Swedish in this old style of writing. Many S’s look like f’s, which is true in English as well, but I learned that most a’s aren’t closed so that they look like u’s; e’s look like n’s, h’s can look like g’s and so on. The above example is a gothic font (so much more uniform than normal handwriting) of Three Blind Mice in English. Look closely to see how challenging reading it can be, and then imagine the variations of handwriting, the extra flourishes, and the Swedish language.

Once you get the letters figured out, you still have to figure out the meaning of the Swedish words. But what fun when you untangle something interesting, like that 1908 divorce or two oåkta or illegitimate great and great-great grandmothers! A mormor (grandmother on the maternal side) and farmor (on the paternal line) grew up as fosterdotters, one because both parents died by the time she was six and the other, presumably, because the mother was unable or unwilling to take care of her. I love the stories.

When the conference was over, Jeannie picked me up again and we met a Chicago friend, Richard, for supper. In a few free minutes I’d called the Hammers to tell them about a mutual friend’s death. I started out the conversation by saying “Guess where I am?” and Richard immediately guessed Witchita, Kansas. He was here too, closing on his mother’s house in the morning and then traveling with her to her new home in Arizona.

And then we came back to Jeannie’s condo just in time to watch the lunar eclipse from the balcony. Pretty cool. I’d arrived in Kansas to dark clouds reminiscent of the early scenes in the Wizard of Oz and then spent the next three days under blue skies and a brilliant sun (and a red moon.)

And I will return home with bulging bags and a boggled mind, ready to continue my Swedish research on a different level. Not that I will have time to do so–the next trip is only three weeks away and requires a bit of prep. I’m going to New Zealand with my friend Marilyn, with stops in Tuscon, Phoenix, LA and Hawaii along the way 🙂 I also have to finish one more week of full-time/vacation coverage work, plus another 5 days in early October AND I want to get all our NZ Christmas and birthday gifts ready.

But Kansas was fun and a little crazy.